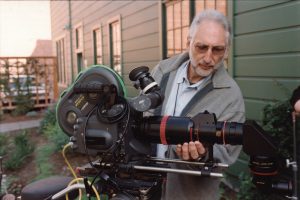 Stephen Lighthill, ASC began his career shooting network news and documentaries, including Oscar®-nominated documentary Berkeley in the ‘60s, Gimme Shelter, and CBS 60 Minutes. In recent years he returned to documentaries with Boffo! Tinseltown’s Bombs and Blockbusters, and The Alzheimer’s Project: Caregivers. Lighthill’s credits also include independent features and television, such as PBS’ Over-Under, Sideways-Down, Hot Summer Winds, Shimmer, and for HBO, Vietnam War Story, and for NBC and CBS, Earth 2 and Nash Bridges. In 2010, he received the Deluxe Bud Stone Award for Outstanding Educational Contributions to the Art and Craft of Cinematography from the ICG, and the 2010 SMPTE Kodak Education Award for Outstanding Contributions in Film Production Education. He is serving as president of the ASC 2020-2022, and is a regular jury member at the Camerimage cinematography festival. Lighthill is currently the Head of Discipline: Cinematography at the American Film Institute (AFI) Conservatory.