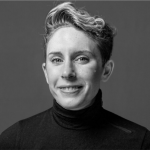 Ari Wegner, ACS, is an Australian cinematographer. Her work includes films such as Lady Macbeth, True History of the Kelly Gang, and Zola. In 2021, she worked on Jane Campion’s western drama The Power of the Dog for which she received widespread critical acclaim including an Academy Award nomination for Best Cinematography, becoming only the second woman to do so in the award’s 94-year history. She also made history as first female recipient of BSC Best Cinematography in a Theatrical Feature Film award.