Originally from Louisville, KY, Bradford Young is a cinematographer and visual artist.

Inducted into the Academy of Motion Picture Arts and Sciences (2014) and the American Society of Cinematographers (2015), Bradford’s recent film contributions include: Ava DuVernay’s When They See Us; Denis Villeneuve’s Arrival, for which he was nominated for an Academy Award and a BAFTA for achievement in cinematography; Ron Howard’s Solo: A Star Wars Story; Ava DuVernay’s Selma, for which Bradford was nominated for an Independent Spirit Award for Best Cinematography in a Motion Picture; JC Chandor’s A Most Violent Year; David Lowrey’s Ain’t Them Bodies Saints, and Andrew Dosunmu’s Mother Of George, both of which won him Sundance US Dramatic Competition Excellence in Cinematography awards (2013). 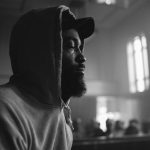